My oldest just turned 3 and she had a fascination with Jessie, from Toy Story, and she requested a Jessie and Bullseye themed party.  I thought, “Not a problem” until I found out that to just limit the party swag to just those two characters was going to be tricky if I was to buy anything commercially and stay on a resonable budget.

I took matters into my own hands and started doing my homework and managed to be able to throw a cute and on budget themed birthday party that looked like a good amount of money was thrown at it.

For invitations, I had a friend that is a graphic artist design me a custom invite that looked like a movie stub that I could sent the file to Costco Photo and have two invitations printed out on a 4×6 photo.  I then found a plain primary colors note card with envelope set at Target for $3 and I printed out directions and other important information on those that the invitation could not support.

For decorations, I found a Cricut cartridge on Ebay that had all the Toy Story characters that I could manipulate for my benefit to make my own decorations (I bought it for $23 band new in the box and sold it one month later via Ebay for $26).  I made cupcake toppers, banners, and accents to table settings. 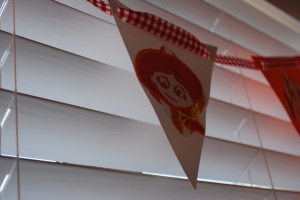 I went to a local feed store (which was a fun side-trip with the kids since they had a few farm critter residence that were fun to meet) and found out that I could rent out bails of hay for $6 that I used for seating and ambience.  I added banners and bandana material to spruce it up.

On advise from a friend, I decided to put my effort on decorations this event and buy pre-made cupcakes.  Albertson’s has a wonderful chocolate cupcake that was topped with delectable fudge icing and mini chocolate chips.  I purchased 36 cupcakes for about $20 dollars. 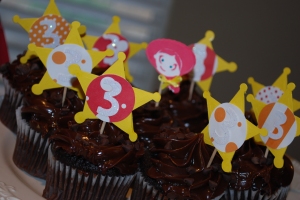 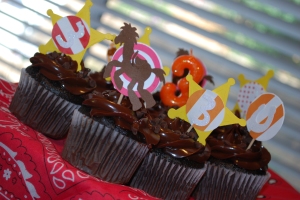 I raided the Michael’s dollar bin and lucked out on finding markers and crayons that were Toy Story themed.  I did the same at Target’s dollar bin and found the tin buckets for the goodie bags and place settings.

I found bandanas and cowboy hats at Oriental Trading Company and sheriff pins on Ebay for the goodie bags.

For eating areas, I opted not to rent table and chairs sand I borrowed a couple of kiddie picnic tables from friends and covered them with butcher paper and a bandana material  table runners and secured with raffia to add a more “rustic” feel.  I found the material at a fabric store on sale and used my pinking sheers to make the table runners.  I went the no-sew approach.  I added the mini tins filled with the markers and crayons that I enhanced with sheriff stars to each place setting.  This was a built in craft idea for the kids.  Now they could color on the table using the butcher paper.

As far as food, it was  a party that served lunch so we stuck with dogs and burgers and the typical side dishes of chips, veggie platter and potato salad.

For thank you notes, I recycled the banners I made for the party by simply adding a back to them and tieing together with ribbon.  When I was at Costco picking up my invitations, I asked for a pack of their envelopes and used those to mail them in.  I got a lot of feedback that everyone loved the thank-you notes!

It was a bit time-consuming, but at the end of the day I saved close to $300.00 by cutting these corners and getting creative.  I had an attendance of around 35 which included about 13 kids. I only spent $350.00 and that also included food and beverages (I did offer sparkling wine and beer to the adults).